On Monday, 11 February, a formal meeting at the highest level took place between representatives of the ministry and the Severo Ochoa – María de Maeztu alliance (SOMMa). The gathering, that took place in the context of the visit of the Minister to the ALBA synchrotron, certified the first formal meeting between the Alliance and the Minister Mr Pedro Duque. 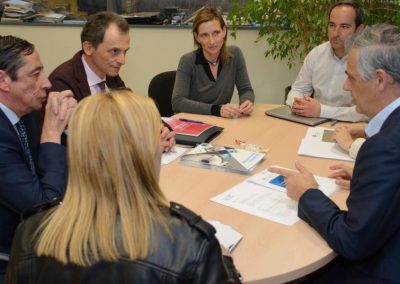 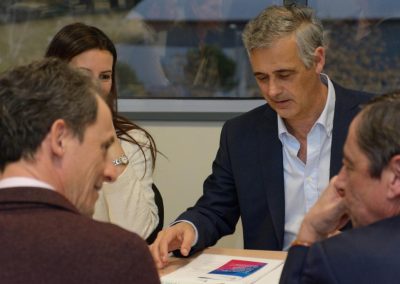 The meeting allowed SOMMa to introduce itself formally to Minister Duque, as well as to establish new communication channels, providing the Minister with first-hand knowledge about the alliance.

Besides Minister Pedro Duque, other attendees were the general secretary of Science Policy Coordination Mr Rafael Rodrigo, and the director of the ministry cabinet, Ms Inmaculada Aguilar. Representatives of the SOMM Alliance were its president Luis Serrano, Bruna Vives in representation of the managing directors of the SOMMa centres and units, Michela Bertero in representation of the European Open Science Policy of the European Commission, and the coordinator of SOMMa Joaquim Calbó.

The aspects treated in the meeting revolved around subjects in the area of science policy, with a prominent place for the Royal Decree law (RD), “Real Decreto-ley 3/2019, de 8 de febrero”, that was passed establishing urgent measures in the area of science, technology, innovation and universities. With regard to the RD as a whole, the alliance expressed its clearly positive evaluation, highlighting it as a step forward for science in Spain. Nonetheless, some doubts were made explicit about particular aspects of the text wording that could limit the real impact of long called-for measures. These referred to subjects as the establishment of indefinite-term contracts with charge to research projects, or to public tenders calls for minor contracts.

Other subjects treated were the problems associated to the application of VAT charges to science, the establishment of a multiannual budget for the State Agency of Research, the plan S and the implementation of an Open Science policy in Spain, as well as the future European Framework Programme. With regard to the latter, the importance of frontier research becoming an integral part of trans-national European projects was highlighted, stressing that sound research quality should remain the main criterion for evaluation.

At the end of the meeting, the Ministry requested the alliance to provide supplemental information regarding some of the matters treated, in order to contribute to better evaluate those subjects. Moreover, an offer was made by the Ministry to establish periodic meetings between the general secretary of Science Policy Coordination and the aggrupation of the managing directors of the alliance, something that was thanked and highly appreciated by SOMMa.

Finally, the representatives of the alliance expressed emphatically their wish to maintain a fluent communication and collaboration with the Ministry, in favour of a solid science policy, favourable to research in Spain.