UB Professor and BGSMath faculty member Marta Sanz-Solé was member of the Abel Committee between 2016 and 2017. Penta asked her to explain what is it like to be part of this prestigious body and how awardees are selected. 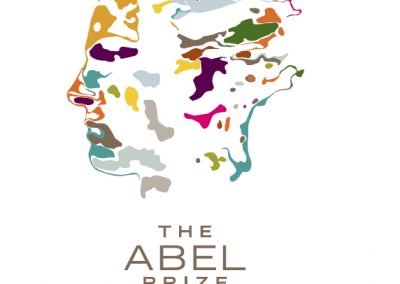 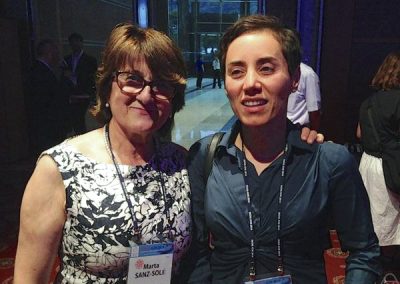 Marta Sanz-Solé had the opportunity to meet Maryam Mirzajaní, the only woman who ever won the Fields Medal in 2014.

According to the Guidelines for the Abel Committee, the Norwegian Academy of Science and Letters appoints the members of the Abel Committee based on nominations from the International Mathematical Union and the European Mathematical Society. The Committee consists of five outstanding research scientists in the field of mathematics who are appointed for a period of two years and may be reappointed once. Their role is to review the nominated candidates for the Abel Prize and submit a recommendation to the Norwegian Academy of Science and Letters. Marta Sanz-Solé was a member of the committee for the 2016 and the 2017 editions.

What is the Abel Prize?

It is one of the most prestigious recognitions for mathematicians. It was established in 2002, on the 200th anniversary of the great Norwegian mathematician Niels Henrik Abel’s birth. The prize, funded by the government of Norway, is 6 million crowns, or about 750,000 euros, and it is awarded by the Norwegian Academy of Science and Letters. Since 2003, it recognised the contributions of mathematicians of extraordinary depth and influence. Funding for the Abel Prize has been part of the Norwegian national budget since 2012.

How are people in the Committee selected?

The Norwegian Academy of Science and Letters always has the last word. The chair is normally a member of the Academy and is appointed for a period of four years. The other committee members are appointed on the basis of nominations from the International Mathematical Union and the European Mathematical Society, with two new members appointed each year. It is really important that none of the members of the committee runs into conflicts of interests. For example, no one of us should have expectations of becoming a nominee. Altogether, the expertise of members of the committee should cover as many fields as possible, and also to know well the major players in the different fields. I like to say half-jokingly that as committee members, we have to be wise people, but not “too” wise.

When does the Committee begin to work?

More or less one year before the Prize is formally awarded, around the month of June, when the call for new nominees for the Prize opens. You have time until September to nominate someone. It is a very open process, everyone can nominate a person. Also, all valid nominations are kept and considered for the following year, unless they have died or they already received the Prize.

How many people are normally nominated every year?

Around 30 people. About a third of them are considered for further analysis. The Committee members can also add new names to the list, if they deem it necessary.

How many times do you meet to decide?

Three times, two in person, and once by videoconference. In the first meeting, we prepare a short list of about 15 people. The most difficult and long part comes just after. For each one of the shortlisted candidates, the committee members have to identify several experts who can discuss and evaluate the impact and significance of their work in mathematics, and also to compare them with others. This requires a very deep and broad expertise, and an honest vision by the selected experts. Keep in mind that unlike the Fields Medals, the Abel Prize is given to mathematicians for the work they’ve done throughout their entire life. Thus, there are many aspects that come into consideration.

When are the next meetings?

A few months after, we hold a second, virtual meeting. We use it to thoroughly analyze all the letters from the experts that have been received, and to decide if we still need more reports. We need to make sure to have the most updated information about all candidates. At this point, we reduce the list to 6-8 people. The last meeting is in January. This is the most difficult and painful of the three. You are looking the work of true giants in mathematics! Each one of them could deserve the Abel Prize. Needless to say, from the very beginning until its end, the process is strictly confidential.

How do you do it in the end?

This is a very difficult question indeed! It may depend on each committee and each year. I understand people’s curiosity about this crucial point. However, giving details could jeopardize the confidentiality of the process.

Do you usually consider mature scientists?

For the way the prize is designed, this is inevitable. One good thing is that, unlike when the Abel Prize was established, now there are a number of different math prizes besides the Fields Medals, such as the Breakthrough Prizes or the Shaw Prize. This way, more mathematicians of different types of seniority can apply. Having different prizes for excellence in mathematics is great to foster knowledge advancement, and the visibility of mathematics.

How would you define this experience in your professional career?

Of all the things I have done in my life, this is probably the most enriching experience. It was the greatest honor, of course. But the scientific discussions we had with my colleagues, the possibility to dig into the mathematics of the highest level, evaluating the impact and legacy of the most important mathematicians have all been eye-opening for me.

How many women have you evaluated?

Unfortunately, there’s only around 5% of female scientists among all nominees. As of today, the number of women mathematicians who are at the height of their career is still relatively small in comparison with men. The Norwegian Academy of Science and Letters takes gender balance very seriously. So, in the Abel Committee, at least 2 or 3 members out of 5 are always women. I strongly believe that having the first female Abel Prize laureate is only a question of a few years.

If you want to read more about this year’s Abel Prize Laureate, Robert P. Langlands, you may find more info here (press release) and here (a text by science writer Alex Bellos). 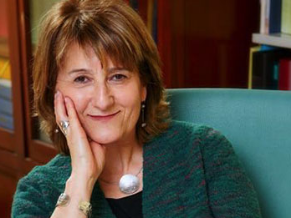